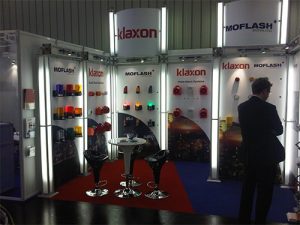 No, we are not referring to Moflash never attending the SPS show again but to the fact that it was the first time that we had participated,  and that it was the last show in the calendar for 2009. Moflash have taken part in more shows in more countries than ever before in our short 12 year history. Some companies take the view of battening down the hatches in difficult times; a stance we do not subscribe to, and to be fair, it would seem the rest of our industry also agrees as there was a strong turnout of signalling manufacturers at the show.

It was the first time that we tried a direct approach in Germany. Simon Evans said: “Although Hannover is of course a German show, we always treat it as a fully international event. However, we were surprised by the amount of international visitors at SPS, rightly or wrongly we expected the attendance to be mainly local.”

Another First was the showing of the revamped 125 series beacons which include LED XENON FILAMENT and BEACON BUZZER combinations and with sales showing a marked increase against the same period last year for the range it would seem that the new shape and increased IP protection has been a hit with existing and new customers.  Also on show was the NEW LED80 and X80 lines again with improved IP protection from the original X75 to IP67 the 80 series gives the installer an effective local signal which is low cost and can be used in the majority climatic conditions .

SPS has thrown up some opportunities which we hope will strengthen our position in what is a very tough market dominated by home grown competition. The plan for 2010 is to double the business in Germany that was achieved this year.

So thanks to everyone who visited the stand, both old and new customers. It has certainly been an interesting year and we looking forward to 2010 and the first show of the year in Hannover.