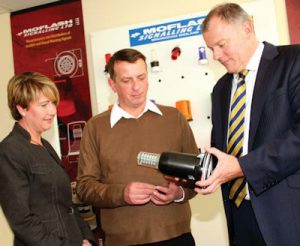 “I have never in 12 years experience recruited so easily.” commented Marc Bailey, commercial director of Moflash Signalling Ltd, based in Tyseley. “I had not previously connected the Chamber with recruitment but a pal suggested it.” continued Marc, who works for one of the largest independent manufacturers of warning beacons and signalling devices in the UK. “We intend to put an additional one million pounds onto our existing turnover in the next two to three years with expected sales reaching £2.5 million. We needed someone to take that growth forward and to manage it.

The Placement Consultancy department received over 300 applications just for this role.” Following screening, shortlisting and profiling candidates, this was narrowed down to 80 and finally two were put forward. Marc said: “We chose one to interview in the morning and offered Jeff Shade the job in the afternoon. He is perfect for the role. “I have never in 12 years experience ever recruited so easily and so well. I would strongly recommend the Chamber recruitment facility to anyone who is considering an important recruitment position in their organisation.”