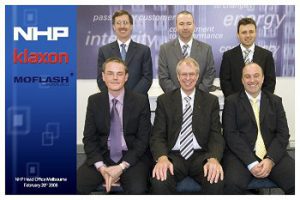 In late February, Moflash embarked on the bi-annual roadshow organised by NHP, the distribution partner for Moflash in Australia and New Zealand. “Over the years, this has been an important marketing tool” said Simon Evans, Sales Director and co-owner of Moflash. “The Australian and NZ market is very important, not only from a sales point of view but also for product development. No other country on earth, with maybe the exception of Africa, will put products through the hoops like Australia. A number of Moflash lines have been brought about from applications in Oz – the X501/500 being one which helped establish both the Moflash brand and the presence of the distribution partner NHP”.

The roadshow kicked off in Melbourne, home city and head office location of NHP. Moflash were joined by Klaxon Signals, the other half of the supply partnership to NHP on the signalling business and gave a presentation to the 20 strong Victoria sales team. The main aim of this roadshow for Moflash was to introduce the Spectrum Tricolour LED which was a concept on the last visit in 2006 and we are glad to say the products received a great reception. “It’s always a worry when you introduce a product so far ahead of the competition” Simon Evans said, “as sometimes too much of good thing can confuse the focus of the sales guys but in this case they saw the opportunities straight away. But to be honest, every time I visit NHP, I come away thinking what a fantastic outfit they are, so it should be no great surprise.“

The next destination was the Auckland branch. Moflash gave NHP the distributionship for NZ back in 2006 and have seen sales double in that time which is down to the team based in both Auckland and Christchurch. Off then for a bit of R&R in Christchurch watching England play the Black Cats in the last one day test. Unfortunately, things did not go to plan, with England losing; however, a good time was had by the boys – Simon, Stuart Mason – Sales Director of Klaxon and Jon Rodaughan – Products Manager for sight and sound.
Next up was Brisbane, a very important office for NHP and for sales of sight and sound. As always, the Brisbane office had a strong turnout and was very knowledgeable about the market. We always get positive feed-back from Brisbane, sometimes criticism – which is no bad thing if it means we can improve products.

The show then arrived in Newcastle, home of the aluminum industry for Oz. Once again we received a great reception from the team in Newcastle who always put 100% into the sight sound sales. Newcastle has a great team and one of the most enthusiastic Branch Mangers at NHP. The business for both supply partners continues to grow. “I believe we could spend two weeks just in the Newcastle area, which would be no bad thing when you consider the wine-making which goes on around the region! “ Simon Evans said.
Now on the home stretch, the show arrived in Perth, the region of Western Australia is the home of the mining industry and if the team could spend a couple of weeks in Newcastle, we could have spent 6 months in Perth. The NHP branch in Perth is on the frontline in regards to the amount of business available and the amount of competitors trying to get a piece of it, Evans said, but once again, they have done great over the last two years and we can see this in the sales growth.